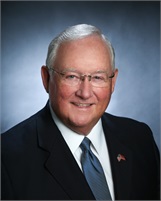 Ask Jim Warren if he believes that accomplishments are important and he will definitely tell you that they are. However, Jim will quickly add a resounding response of deep conviction that a person’s character is infinitely more important than any collection of accomplishments. How he has responded to the struggles of life has molded his character into the servant-leader that he is today.

Born in Oak Ridge, Tennessee, and growing up in Cleveland, Ohio, Jim was no stranger to adversity. The death of his father when Jim was 19 indelibly impressed upon him how fragile life is. His combat service in Vietnam as a Marine Corps officer vividly taught him that: “Freedom is not free and we must pay a price for what we value most in life. There is no short path to success and significance.” The Marine Corps reinforced the values of honor, courage, and commitment; values which he holds dear today.

To survive and thrive through difficult days, it was his mom who taught him the power of a great faith in God. She also demonstrated the gift of an unstoppable sense of humor. Her character and example imprinted these truths on Jim’s heart during those painful years surrounding his dad’s death.

These influences and events led Jim to calm convictions about how he should live his life and how he should serve others. Those same calm convictions saturate all aspects of how he operates Compass Wealth Management: “I was brought on this earth to lead and make a positive difference in the lives of others desiring a trusting, competent steward leader. I know what I am willing to live and die for and have the courage of presence to stand firm and fill a gap when someone is in need. We are stronger when we move in the same direction together. I know today there is nothing to fear and there is a plan for each of our lives if we will lead with humility and servanthood, ‘carrying the towel.’ Today, our wealth management practice is a reflection what we are about in life and then defines what we do. It is all a gift.”

The quality of Jim’s character enhanced his accomplishments while winning the hearts and minds of people around him. He earned a BA in social sciences at George Williams College, (Chicago) and continued his education at the University of Chicago. Jim has owned an independent financial planning firm since 1982. He earned the professional Certified Financial Planner (CFP™) designation from the College for Financial Planning in Denver, Colorado. He has served as the Guest of Honor at Marine Corps Balls in Kansas City, Missouri; Chicago, Illinois; San Antonio, Texas; Portsmouth, New Hampshire; and Fort Leavenworth, Kansas.

In addition to being the Founder and President of Compass Wealth Management, LLC., Jim has generously shared his wisdom, talents, and support in numerous areas. He served as a member on the Advisory Board of the Business College at Central Missouri State University, Warrensburg, Missouri. He served as Chairman of numerous boards and organizations: the Advisory Board of the College of Human Environmental SciencesFinancial Planning Department at the University of MissouriColumbia; the Kansas City Chapter of the Fellowship of Christian Athletes; the Endowment Development Advisory Board for the YMCA of Greater Kansas City; and a previous broker/dealer’s Advisory Board. Jim is currently an Investment Advisor with Geneos Wealth Management, Inc., an independent broker/dealer, and serves on the President’s Council.

Jim previously served as Chairman of the Board of Trustees for the Marine Military Academy in Harlingen, Texas. He actively supports the Marine Corps Scholarship Foundation offering higher education scholarships to the enlisted families of fallen Marines and the Semper Fi Fund offering financial support for the families of wounded Marines.

For ten years, Jim led a weekly men’s accountability group with Teaching God’s Infinite Wisdom (TGIW) in a Kansas City YMCA and has served on the Board of Directors for the Character That Counts organization (www.characterthatcounts.com).

In addition to these many areas of service, Jim is a nationally recognized motivational speaker focusing on principle-centered leadership. Jim was the recipient of the “Who’s Who in American Business Leaders” national award for his achievements in the business community. Jim and his wife Sharon received the Distinguished Service Award from the University of MissouriColumbia for their leadership and support of the College of Human Environmental Sciences. Jim was selected by the University of MissouriColumbia as the “Financial Planner of the year” award. He also serves as an Ambassador at The National Golf Club of Kansas City (www.thenationalgolfclub.com).

The Warrens reside in Kansas City, Missouri, with their talented and loving canine companion, Gracie, a miniature schnauzer with a big attitude.